Since Omaha is the home of the College World Series, it's almost criminal not to take in an occasional game.  My son and I went down to game 5 today between Florida State and Stony Brook.  We had our general admission tickets and were prepared to become like rotisserie chickens being baked by the sun in the west facing seats.  An NCAA person flagged us down near the ticket booths and said they were looking for father/son pairs to give seat upgrades.  No-brainer right?  After getting inside I quickly realized that we would be sitting behind home plate in the 5th row!  I don't even want to know what people would regularly pay for these seats.

Great game.  Lots of runs.  We were cheering for the underdogs, and although they didn't make it a close game, it was an enjoyable day.  Hope you fathers out there had a great day, and were able to do something special.

Here is a really bad photo taken on my blackberry.  The lens must have been fogged over from being in my pocket.  I'm not a huge baseball fan, but the CWS is a great environment to experience.  Oh, and by the way, UP #844 was sitting just outside, north of the stadium.  We were hot and tired so decided not to check it out this time.  I guess we are too jaded seeing it in action, while chasing it for 100 miles just a few months earlier. 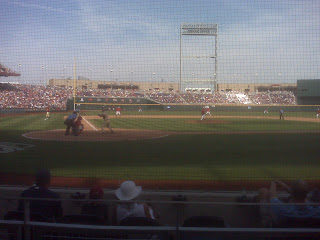 Posted by NscaleAddict at 9:14 PM