I have been busy the last couple days moving copies of hundreds of images to my online Picasa photo albums.  I upgraded my Canon Rebel DSLR about a year ago, and the first DSLR had taken about 10,000 photos.  While it is the "family camera", I am guessing a majority of those photos were railroad related.  My new DSLR has well over 2000 photos including about a hundred videos already.

Many of these photos have already been featured within my blog postings, but many have not.  Many are simply duplicates of the same object, just taken at different angles or exposure.

I hope you enjoy viewing my gallery and maybe something will inspire you to start a project of your own.  Stay tuned for lots more photos, both of existing and future work. 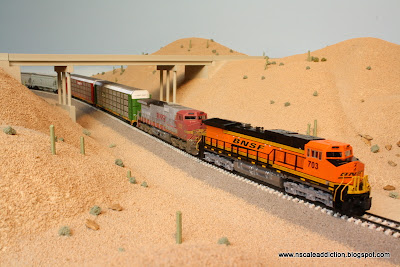 Posted by NscaleAddict at 9:55 PM No comments:

I recently decided to build a new complimentary blog as a dedicated photo and video archive of my N scale projects and prototype trips.  I have collected thousands of photos over the years, and want to share them with fellow N scale enthusiasts.
Over the next several weeks, I will begin building and organizing my albums and making them public via my new blog.  I will continue to post frequently here with my ongoing projects.
N Scale Addict 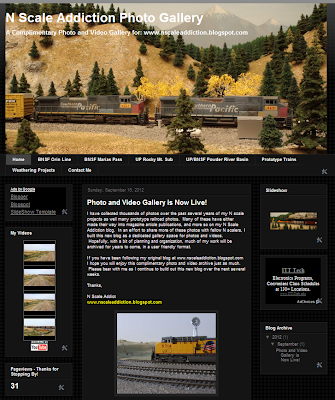 Posted by NscaleAddict at 11:15 PM No comments:

Years ago I discovered a rustic barn made by Showcase Miniatures, and considered the kit for a scene on my Orin Line.  I never purchased a kit, so obviously it never made its way onto the Orin Line.  Driving through Western Nebraska on a family trip just before Labor Day, gave me some inspiration for some possible projects, and just maybe the setting for my next layout.  Being born and raised in the state of Nebraska, there are some attractive modeling possibilities for either the BNSF or the Union Pacific, in either a dry western plains setting, or a more productive cornbelt setting.  Either way, I have lots of ideas, and came home from the trip ready to pursue them further.

I revisited the Deloney Barn, and decided to buy a kit.  It would make a very nice Western Nebraska ranch scene, perhaps as part of a transition from pivot irrigated crop land to rolling sandhills.  It came in the mail today, but I may put it aside for awhile before I actually build it.

Anyway, I thought it was worth mentioning, as it appears to be a great little kit, with multiple applications.

If anyone has built this kit and has some suggestions, I would love to hear from you. 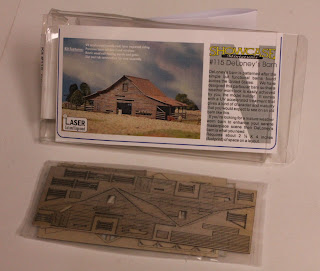 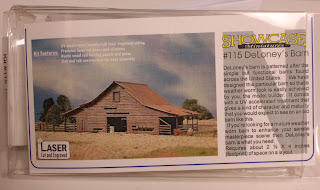 Posted by NscaleAddict at 9:34 PM 2 comments:

Today I went trackside just west of North Bend, NE to watch UP #844 as it made its way westbound towards Cheyenne.  I have seen the loco multiple times this year, but simply can't pass up an opportunity to see it again, especially since it is in my own backyard.  There is just something special about live steam, and seeing it in action.  Click here to see my short video 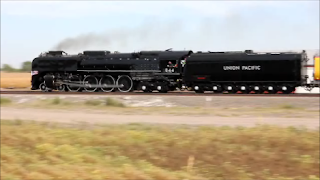 Posted by NscaleAddict at 10:17 PM No comments:

Weathering - Back in the Saddle (sort of)

My model railroading activity has been almost non-existent lately.  I did however get a few packages in the mail recently that have sparked my interest.  That, and a mild forecast for the next several days and perhaps longer is motivating me to get back into my hobby.  My fascination with the 86' big ugly's has led me to collecting other hi-cube boxcars.

LBF made a nice 60' version which is long gone now in N scale, but you can still find them on ebay.  I weathered a TTX and a BNSF several months ago, and found a set of 5 more painted for NS.  I have the trucks off of them and will be fading them soon I hope.  They didn't cost a lot and will add variation to my manifest trains.  I also found a few shorter LBF 50' hi-cube boxcars in CNW paint and CHTT.  I found these brand new online.  The cost again was appealing, and they come with Micro Trains trucks which is worth a lot just by themselves.

I picked up a half dozen Exactrail hi-cube cars as well.  First, I found a CN version which has been sold out for some time now, and was a great find in my opinion.  The rest of the batch were all TTX, and the latest run by Exactrail.  I was pleasantly surprised to see the model has been upgraded to body mounted couplers.

Lastly, I picked up a BN 86' box which I plan to destroy with fading, graffiti, and lots of rust.  I also bought several more sets of Blair Line graffiti decals (not pictured).  I found I like these better than the MicroScale graffiti decals.

So overall, not a lot to brag about as far as actual modeling progress, but lots of goodies to add to my already overweight project collection.  Hopefully I'll get around to working a few of these models in the upcoming days. 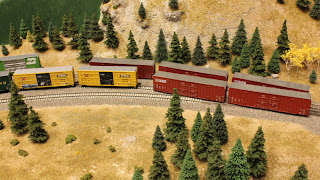 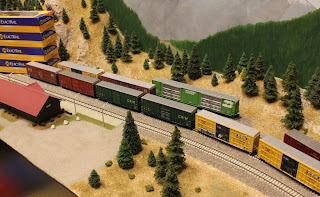 Here is a comparison shot of an original run and a current run Exactrail 50' TTX hi-cube.  The car hasn't changed much, but a nice improvement is the body-mounted couplers.  The paint and lettering seem to be a bit more crisp, which was about perfect anyway. 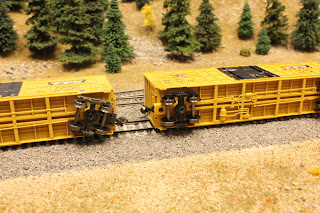 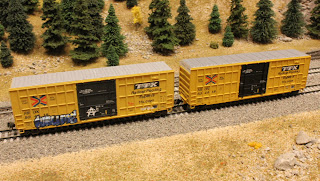 Posted by NscaleAddict at 2:19 PM No comments: