I have people ask me on occasion about what track I use for my layouts.  I don't recall the exact timing of the release of Atlas code 55, but it was prior to starting my first N scale layout which would have been around 2002.  I have used Atlas code 55 flex track and turnouts exclusively on all 4 completed layouts to date.  The exception is the concrete tie flex track made by Micro Engineering which I used both on the Orin Line and Marias Pass layouts.  Altas released their #10 turnout prior to the construction of the Orin Line, which was a great addition, especially for better looking cross-overs.  Micro Engineering also makes code 55 flex track with wooden ties, however, I have not used it.  I did use a 36" length of ME flex track with bridge ties on the Marias Pass, and was very pleased with the product.

There are differences between the Atlas and ME code 55 track.  While the rail is very similar in shape/profile, the tie spacing and thickness are quite different and must be accounted for when mixing the two different brands together.  The ME flex track also comes in weathered and non-weathered rail.  This is also important.  The Atlas flex track can simply be painted the same color (ties and rail) since it has wooded ties.  The ME flex track on the other hand requires a very steady hand if you wish to paint the rail, but not the concrete colored ties.  For this reason, I like using the weathered rail.

I submitted an article that was published in the Jul/Aug 2009 N Scale Railroading that illustrates the differences between Atlas and ME code 55, and further discussed the ME concrete ties to build a modern looking mainline.

Here you can see the difference in tie thickness between the Altas and ME code 55 flex track.  The difference in rail height must be accounted for when mixing the two brands.  I used a styrene shim under the Atlas flex track to raise the height by about 0.30" to match the ME rail height.  The same shimming is also needed when using an Atlas code 55 turnout next to ME code 55 flex track. 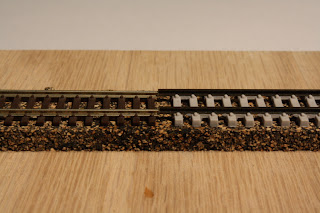 I used ME code 55 with concrete ties on my mainline, while using Altas code 55 turnouts and flex track on a third track/siding on my BNSF Orin Line layout.  The mixing of concrete ties and wooden ties provided a unique modeling opportunity, and suggests that the railroad is in the process of updating their track work over time. 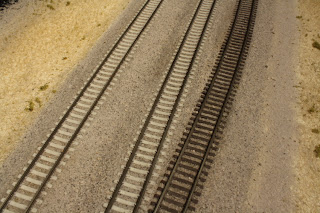 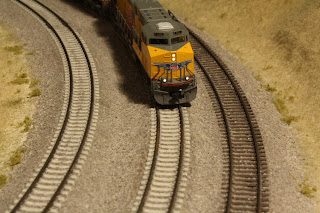 On the Marias Pass, I used ME code 55 flex track with bridge ties, to span the Flathead River.  On one end, the bridge track connected immediately with ME code 55 with concrete ties.  On the other end, I needed a short section of Atlas code 55 with wooden ties, before entering into a #10 turnout.  One trick I used is that instead of putting railjoiners at the point where the bridge track and concrete track meet, I used the full 36" of bridge flex, and removed the last several inches of bridge ties and replaced them with concrete ties.  This moved the railjoiners down the line several inches and actually into a tunnel where they were hidden.  Less gaps and railjoiners means better, smoother track and operation. 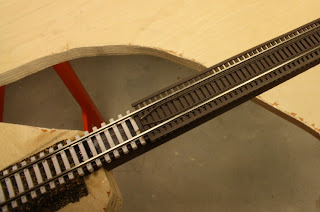 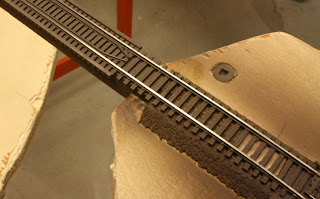 Posted by NscaleAddict at 7:48 AM