This page showcases the model railroad layouts that I have completed over the past several years.  If you want to see more, I have tagged the relevant postings under the topic "Model Railroads".  Please click HERE to see them.  A list of topics can also be found on the left hand navigation bar on this blog.  Thanks for looking, and I hope you enjoy my work.

In late 2002 I began my first N scale model railroad.  It was an "L" shape measuring about 4.5 x 6.5 feet.  It was completely freelanced, however, the theme was based on the Powder River Basin area in Eastern Wyoming.  I completed the layout in 2003 and later sold it to begin a new project. 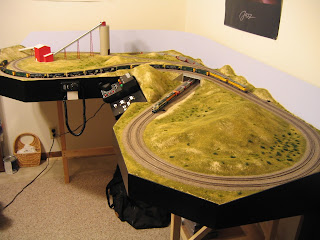 In early 2004 I started working on my 2nd model railroad which would become the "Rocky Mountain Subdivision", based on the general area of the Colorado Rockies.  I completed the layout about a year later, displayed it at a couple trainshows and then sold it to work on yet another project.  Fortunately a good friend of mine and also an N scale addict bought the layout, so it didn't go far from home.  This layout was featured in the May/Jun 2005 N Scale Railroading. 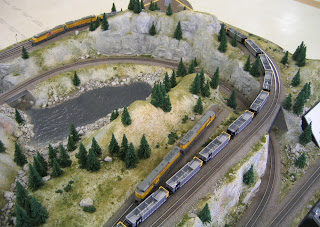 In early 2006 I begain my 3rd model railroad.  This time I went back to Eastern Wyoming as my theme for what would become the BNSF Orin Line.  I completed this layout about 1 1/2 years later and displayed it at both the 2009 and 2010 Train Expo in Council Bluffs.  I sold the layout in May 2010 and began yet another layout.  This layout is featured on the cover of the Jan/Feb 2011 N Scale Railroading. 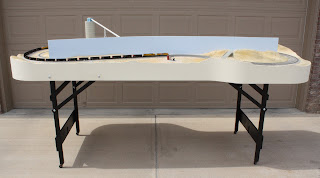 The BNSF Marias Pass features a foot print very similar to the Orin Line.  I began construction in April 2010 just before I sold the Orin Line to a great N scale enthusiast in my neighboring state of Kansas.  In just over a year this model railroad was near complete and ready for final photos which would be featured in a new article series in N Scale Railroading.  The Nov/Dec 2011 issue featured the Marias Pass on the cover, and the introduction article.  Not a bad way to open and close out the NSR calendar year with model railroad features! 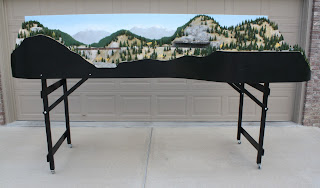