I have been focusing on day cab, short haul truck models to date, and wanted to try something more suitable for an over-the-road version.  I settled on a Peterbilt 387, and am pretty close to having a full design ready for printing.

I struggle a bit with how much detail to add to my designs.  If I look at commercially available trucks, some are highly detailed, while others are very rudimentary, especially around the suspension, frame, and areas that aren't as important as the cab, and highly visible areas.  I guess I am somewhere in the middle.  I think my time is better spent designing new models, then taking those same hours and pouring fine detail into a model, particularly in areas that won't be seen unless the model is upside down, or under a microscope.  And, N scale is an interesting scale, in that from 3 feet away, a very simple model can look very realistic.  However, I also have enough experience with model railroad photography to know that those tiny details are outstanding for those magazine article spreads.  So again, I think somewhere in the middle is where I want to be.  So will I ever design interiors or window glazing?  Probably not in the near term, but I am hoping that other modelers who use my designs will dress them up to their full potential.  Perhaps in the future as time allows, I can super detail both my designs, and the final printed models.

Here is a 3d Shapeways rendering of the first draft Peterbilt 387.  It still needs a few minor revisions, and then it should be ready to print very soon. 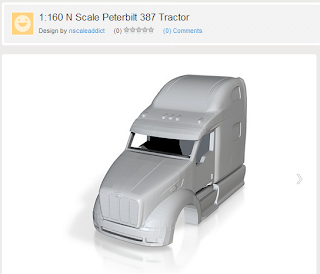 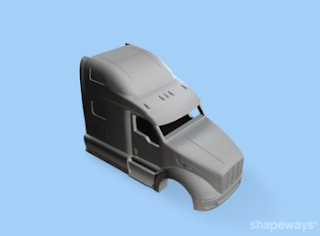 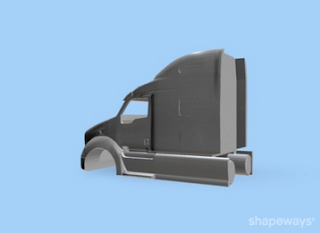 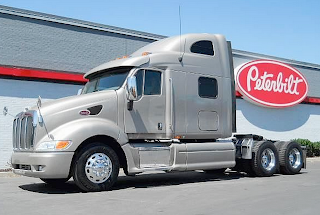 Posted by NscaleAddict at 3:16 PM 2 comments:

I spent some time this weekend enhancing my 379 Peterbilt design, which included a much needed sleeper.  I now have both a 48" and 63" Unibilt flat top sleeper, which is a separate component from my existing cab.  I added twin 150 gallon fuel tanks to the frame, and made the front rims more prominent in order to help get a more crisp paint line between tire and rim.  These are now loaded and available on Shapeways, and I will be ordering my first set very soon.  Progress on anything N scale related has slowed to a crawl, due to other priorities right now.  I hope to have at least a few new models out in the next couple months as time allows. 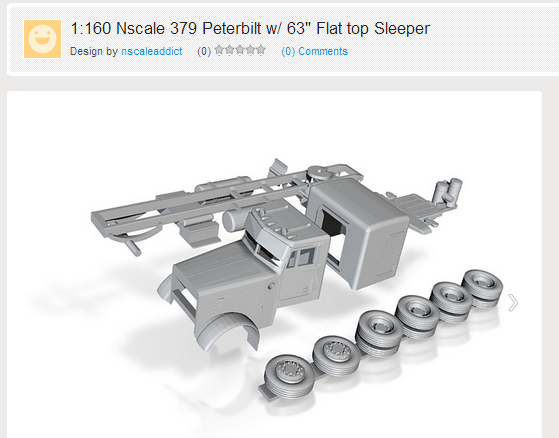 I have been working on 3d printing projects for so long now, and decided it was time to refocus some attention on a new layout project.  As you may be aware, several months ago I created a design for a Union Pacific Council Bluffs Subdivision shelf layout, which would be built in 2 sections for a total of 16' in length.  I even had the beginnings of the benchwork for the two tables.  After some additional thought, I have decided to reduce the overall size of the layout, and change the shape into a long "L".  The main reason for this is the fact that my garage space where my layouts are built and displayed won't accommodate 16' without a car parked outside.  Secondly, the thought of having a seam between table sections just doesn't appeal to me.  So going back to my trusty 10' length, I came up with a 10' x 4' "L" shape shelf layout.  In order to make the plan work, I did add a removable extension.  Another feature that I thought would give this design some added interest is a set of staging tracks behind the long backdrop.  The tracks will be accessible to the front through a hole, hidden by the grain elevator structure.

I used MS Excel to create my last track plan, and since I have been using Sketchup to draw my 3d objects, I thought I would use it for my layout drawing as well.  I have only spent about an hour total on this drawing, so this is far from complete, but will give you an idea of what I am trying to achieve.  I don't plan to put a lot of detail into this plan, as I would rather spend the time building the benchwork and laying out the track configuration on the real thing.  With all that I have going on, I need to find ways to cut corners, without adding risk to the project.

The industries on this layout will be similar to what I designed in version 1, taking into consideration the truck/trailer combos that I want to feature.  Again, this is a sloppy first draft, but using 3d helps me visualize my ideas.  My goal as of now is to have enough of this layout finished to display at the Council Bluffs Great Train Expo in February 2014.  We'll see how far I get.  As always, your feedback is greatly appreciated. 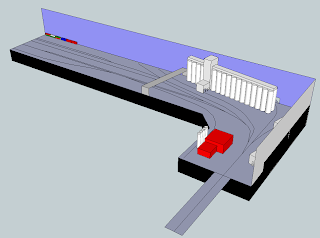 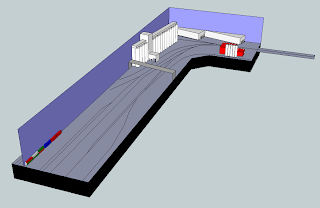 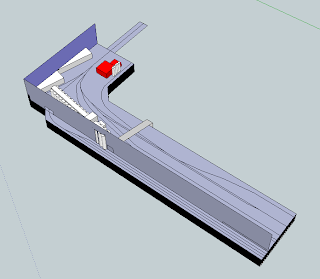 Posted by NscaleAddict at 8:25 PM 2 comments:

Email ThisBlogThis!Share to TwitterShare to FacebookShare to Pinterest
Labels: UP Council Bluffs Subdivision

Just a quick update on a new model I designed recently.  I now have a headache rack that will fit any of my truck models.  I used a Merritt brand as my reference, and overall it was a fairly easy project.  These simply set right on top of the frame, behind the cab, and are secured with a drop of CA.  I am guessing these would also work for other N scale models made by other manufacturers.

I also have a grill guard for my Pete's that turned out very well.  I hope to have a finished model to show soon.  Up next is a sleeper for my day cab trucks, but not until I get some of my unfinished inventory taken care of.  I have about 20 various truck models that need paint, assembly, and details.  It is near impossible to balance new model design, maintenance of existing files and models, and getting around to finishing my own personal truck collection.  Oh, and throw in a new layout project on top of that.  I have been spending some time on the layout design lately, and hope to begin making some progress there. 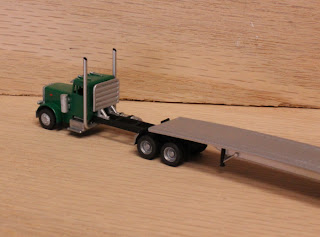 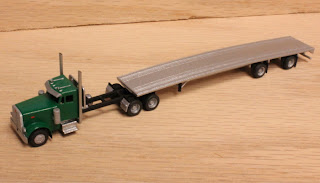 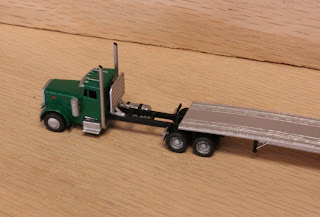 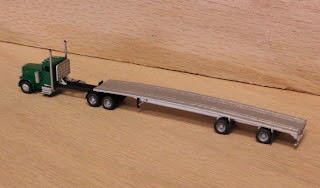 Posted by NscaleAddict at 5:21 PM 2 comments:

I spent some time painting my livestock trailers today, and finished the first one.  I was surprised how clean the model was right out of the box from Shapeways.  I simply soaked it in solvent, then rubbed it with a toothbrush and some toothpaste.  I did take a flat file to the front and top surface to remove some very minor surface lines.  Other than that, it was ready for paint.  I used a flat white primer out of a can, and let that dry overnight.  I then shot it a couple times with a rattle can of aluminum paint.  The tires were painted grimy black to give them a more realistic rubber color.  The mudflaps are paper, and I used a printer to add the Wilson Trailer logo.  The name plate on the front is also paper.

I went overboard on the photos, but as much anticipation as I have had over the weeks of design, and leading up to the printing and delivery, I think this model deserves some attention.

I made these models available for purchase from my Shapeways store in both a single and double set.  This is a larger model, so beware that they are a bit pricey.  However, I am not aware of another livestock trailer available in N scale.  Overall, I think this is near or at the top of my favorites list.

A few people have commented on the lack of a sleeper on my Pete, and I agree that I need some sleepers to go with my day cabs.  I have plans to design a sleeper, and hope to get to that project soon.  My herd bumper is printing now, and I should have that in another week, in addition to my headache rack. 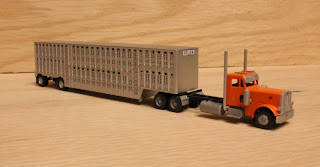 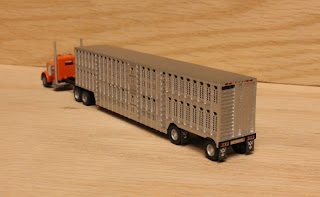 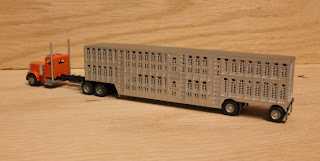 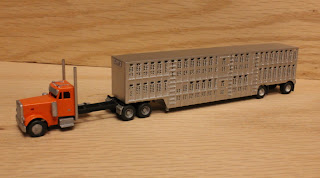 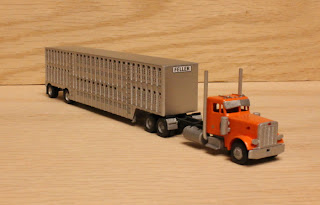 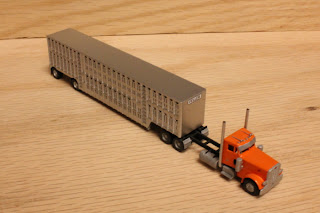 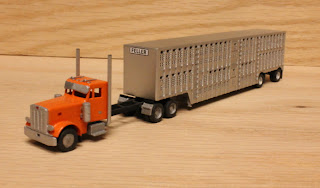 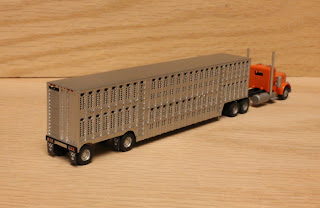 The UPS truck stopped by today with a package from Shapeways containing a pair of livestock trailers.  I only had enough time to clean and prime them, but wanted to show them anyway.  I'll let the primer dry overnight and then shoot the aluminum top coat.

This design was the riskiest by far, as I was not sure if the small vent holes would print accurately.  For the hours I spent on this design, and some rework on my part, I was really hoping for the best.  Well, when I opened the package, I was very satisfied with what I saw.

I haven't been able to find any current livestock trailer model currently available, or any decent model that was ever done in the past.  So here it is: 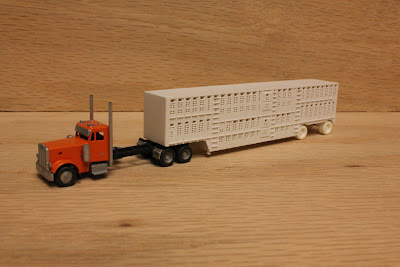 Posted by NscaleAddict at 9:56 PM No comments:

I completed a pair of dump trucks this weekend and a single pup trailer, except for mudflaps.  I was quite pleased with the way they turned out.  I have several more in a pile waiting for paint.

I have made the Mack trucks available on Shapeways, and added a tandem version without the extra lift axle for additional options.  https://www.shapeways.com/shops/NScaleAddict 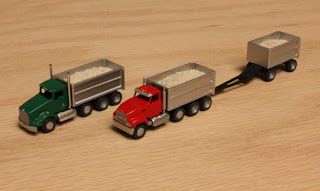 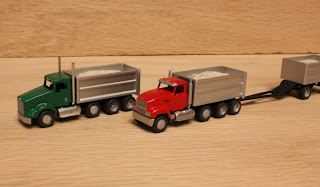 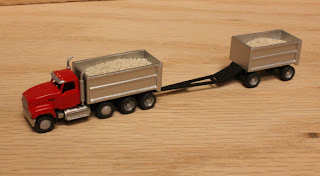 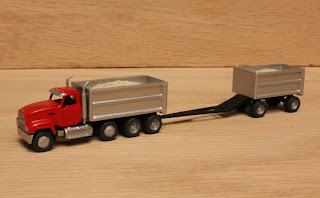