It's been over a month since I have posted here, but it hasn't been due to a lack of any railroading.  I have some projects underway that I will share when the time is right.  On a separate note, it's that time of year again, when the GTE comes to Omaha/Council Bluffs, and typically in the past I have taken a layout if I was finished with the project.  This year I am actually going to be able to take the Marias Pass to its 2nd train show.  I offered the layout for sale several months ago, and while it has been spoken for, I have the benefit of holding it while arrangements are made to move it to it's new home in the future.

The GTE is this coming weekend at the Mid America Center in Council Bluffs, so early Saturday morning I'll be driving the Marias Pass across the river to set it up.  Last year I transported it in the minivan, and while it may seem impossible when looking at the layout and then looking inside the van, I will just say that I have seen 15 clowns get out of a small car before.  Same concept.

This year I plan to use a new aluminum stock trailer from the family farm, which will protect it well during the 20 mile trip.  Although it fit in the van fairly well, it stuck out the back about two feet.  I had a protective cardboard box that I built to protect it from wind and road grime.

Anyway, I thought I would share some photos from last year, as I prepare the layout for this year's show.  Not much has changed other than it is a year older, and I have some different rollingstock to operate this time around.

Please stop by and say hi if you attend the show.  This will be the first year that the layouts and vendors will be set up in the arena rather than the two exhibition halls. 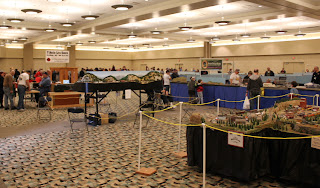 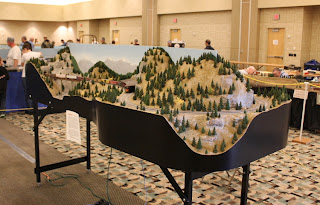 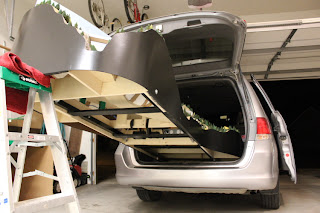 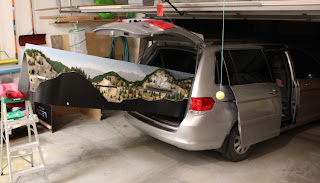 Posted by NscaleAddict at 9:14 PM 5 comments: