Once in awhile I actually have time to "play", and come up with fun projects like this Kenworth W900L that I recently finished.  I decided to go with an orange visor, frame, and tanks, to give it a slight custom look.

My lighting really dulls the orange paint, as it looks brighter on the actual model.  One of these days I'll get these trucks outside in some natural light and take some better photos.

These kits are now available in a 2 pack from my Shapeways Shop:  N Scale Kenworth W900L 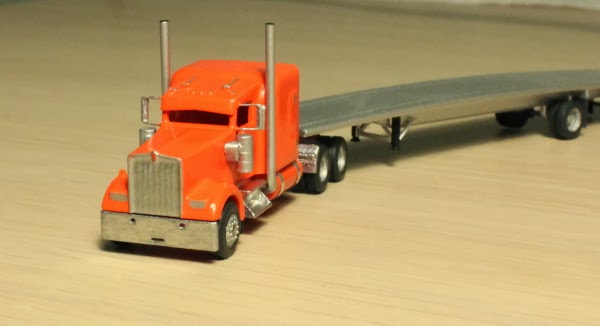 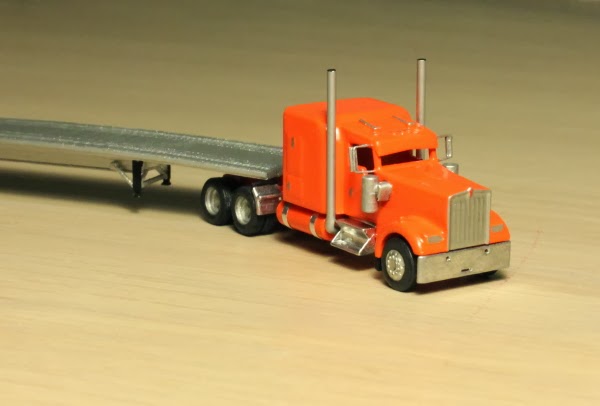 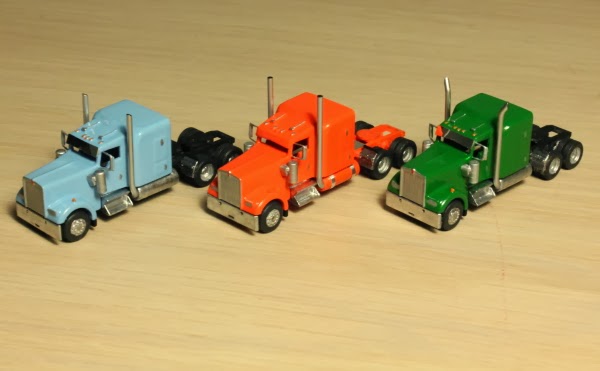 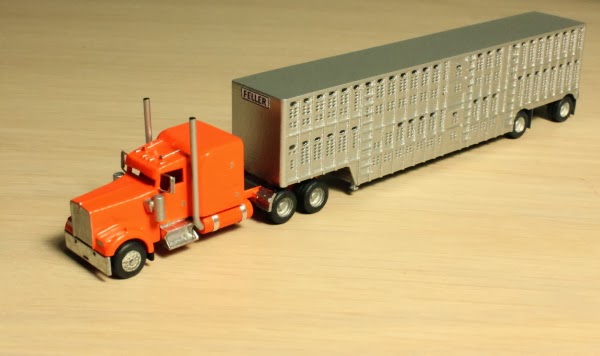 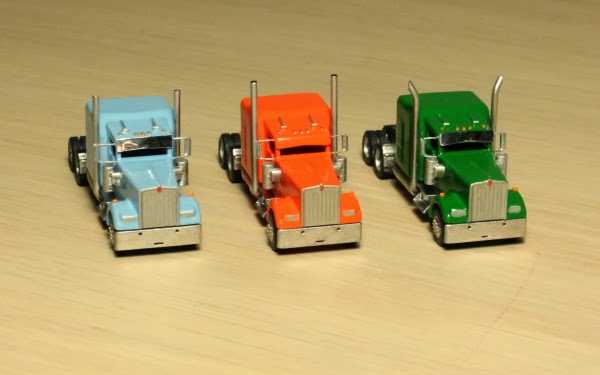 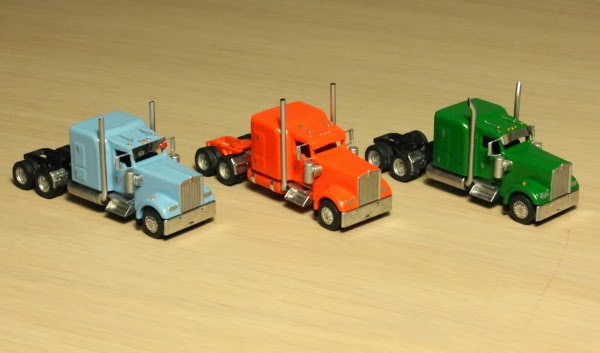 Posted by NscaleAddict at 10:59 PM No comments:

How To: Shine Up Your Truck Models With Chrome Tape

I thought I would share a quick and easy way to chrome out your NScaleAddict trucks and trailers using an inexpensive chrome tape.  I have to credit a fellow N scale enthusiast for applying this technique after buying some of my truck models, and I liked it so much that I just had to get some myself.

First of all, I set out to find a chrome tape that had a mirror finish, yet very thin.  Using my friend Google, I found several different types of tape, mostly being used for automotive applications.  I landed on a 1" wide roll that was about $6, and it arrived just this week.  The tape is rigid, yet flexible, so not like foil for example.  It has a nice mirror finish, is very thin, and has a self-adhesive backing.

I decided to trim a small piece for the sunvisors on my Kenworth W900's, since it is difficult to get a shiny finish on details when applying paint with a brush.  I intend to try chrome tape on other details like the fuel tanks, and front bumper.  I also plan to add some whip antennas and maybe some other minor details.  Slowing but surely, I am getting these rigs ready for the showroom.

It really makes the models pop, and enhances the details overall.  I shot a few photos tonight to illustrate examples.  Yes, I know the PODS aren't tied down to the trailer.  :) 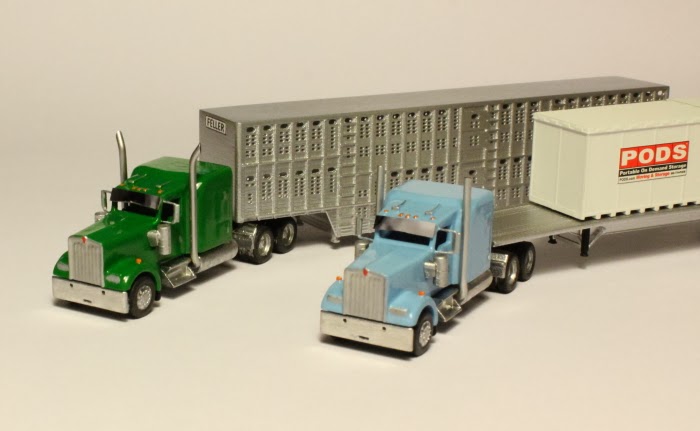 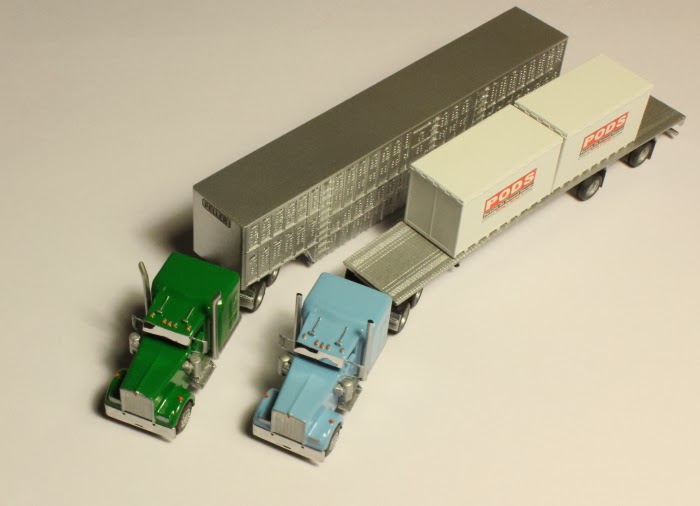 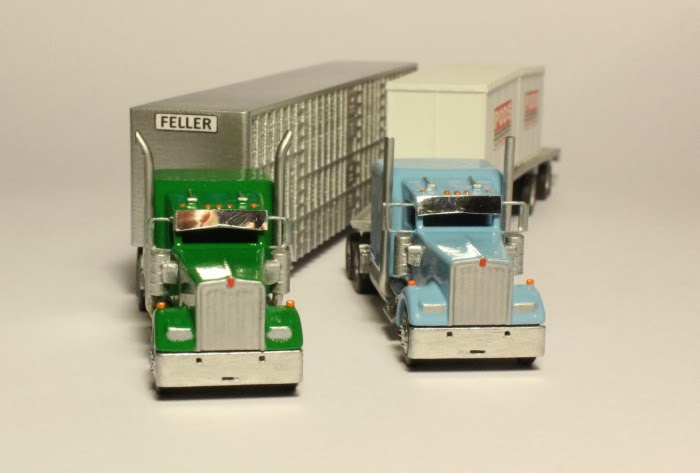 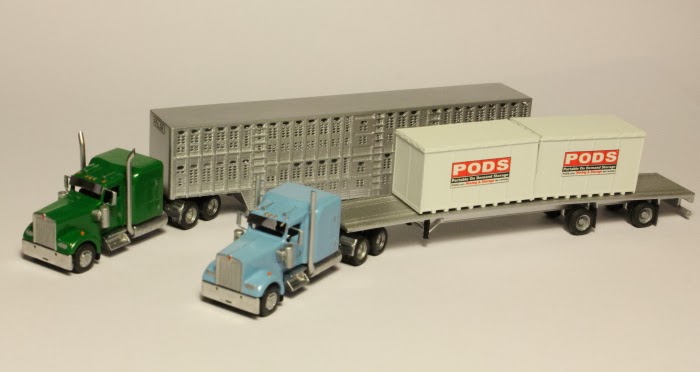 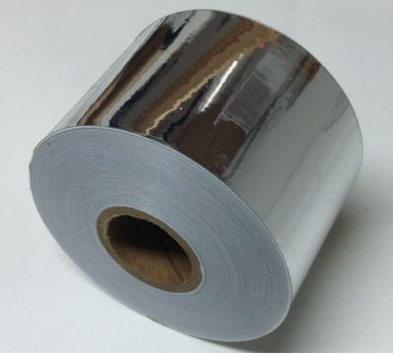 Posted by NscaleAddict at 9:57 PM 3 comments:

I've been thinking a lot lately about starting a new layout project, and after months of ideas and false starts, I think I am ready to finally jump off the diving board.  I have other interests outside of model railroading, and a break from my intense 3d printing addiction the past couple of months has been nice.  But after being without a place to run trains for about a year now is starting to drive me nuts.  I had a set of track plans and had even built a pair of long tables for a shelf/switching layout, but never really got past the benchwork stage.  I want to build an industrial style layout with lots of buildings and activity, and a place to feature my truck models, but just can't sell myself on a layout without continuous running capabilities.  While watching a train run in circles seems like "playing" with trains to some, I actually enjoy it.  I have a few boxes of new Kato intermodal equipment sitting in the box that I am itching to put on the rail.  And the thought of shoving them in a yard, without the ability to run them continuously just didn't spark any interest.  So after some deep thought, I think I finally landed on a track plan that will work for me.

I guess the 2x8' tables that I built did serve a purpose, as I decided that my next layout will only be 8' in length.  I really like the 4x10 footprint that I have used in the past, but 8' will allow me to shove the layout into a few different spots in my garage, making room for other things.  And this layout isn't about broad curves and scenery, but rather industries and detail.

Using Sketchup, I drew a very quick sketch of a trackplan in a 3.5' x 8' space.  I spent about 30 minutes putting this together, so take it for what it's worth.  I still want to incorporate most of my industry and switching ideas from the shelf layout plan, but add a continuous loop for unit trains.  I drew this with a double mainline, but also want to consider a single main which would give me more room for other things.  This is where I could use some input from others.

I have a few of the industries planned including a grain elevator, meat packing/cold storage, and an intermodal yard.  I also added 4 hidden staging tracks to allow for ample storage of cars and trains, which will add some interest to operations.

Well, there you have it.  I am pretty serious about this plan, as it seems to fit most of my needs.  And, I just need to start something before the idea gets stale and I lose several more months.  I'll fine tune it over the next few weeks, but this is at least a good starting point of what is in my head at the moment.

Let me know what you think. 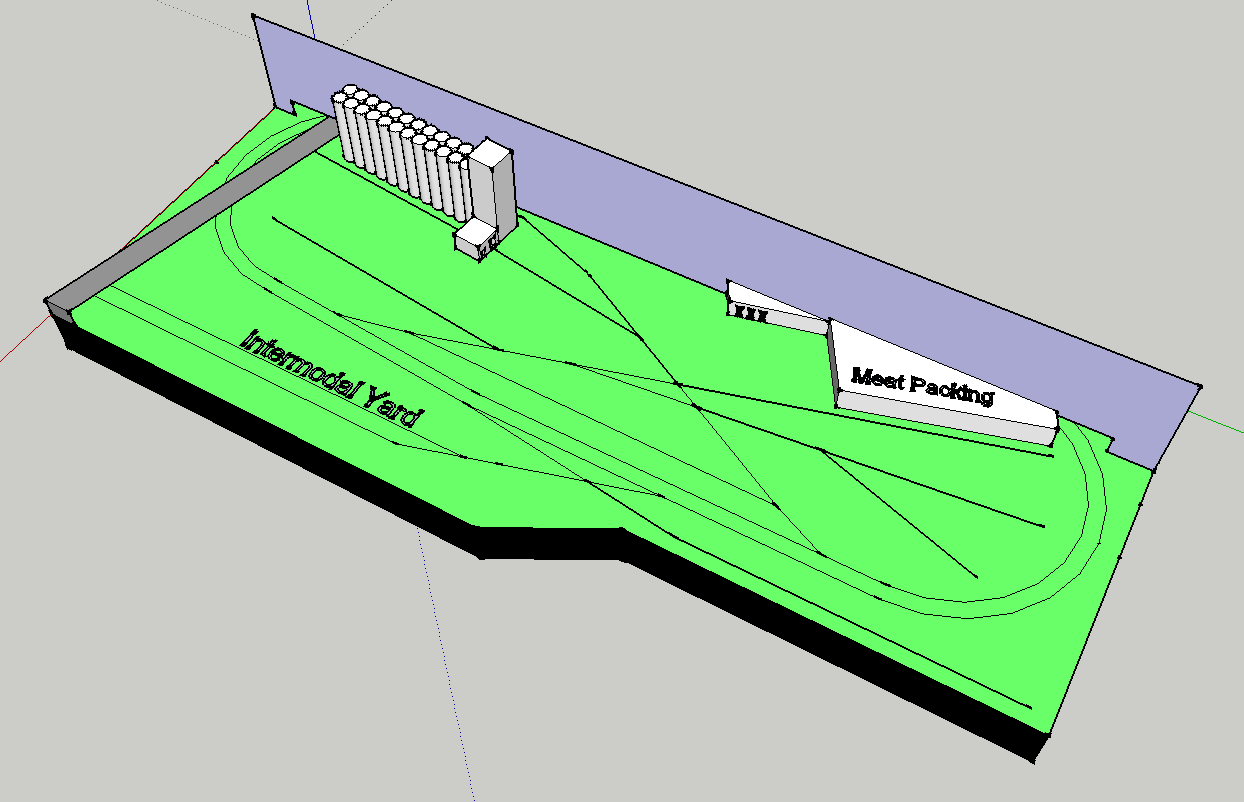 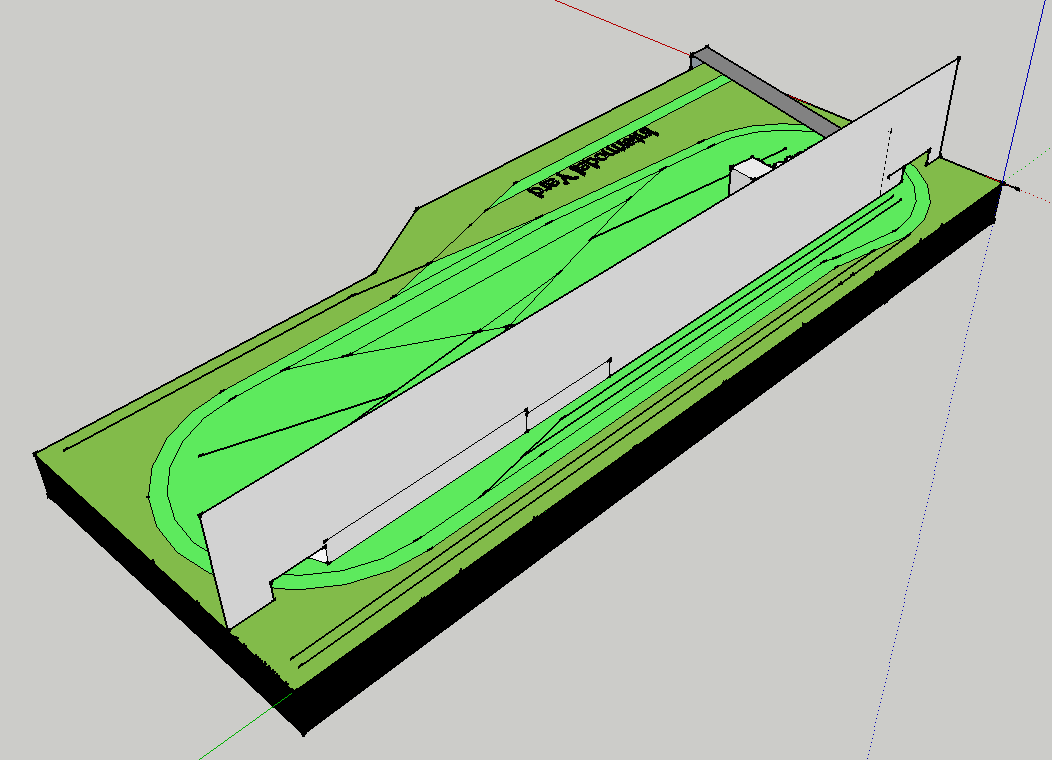 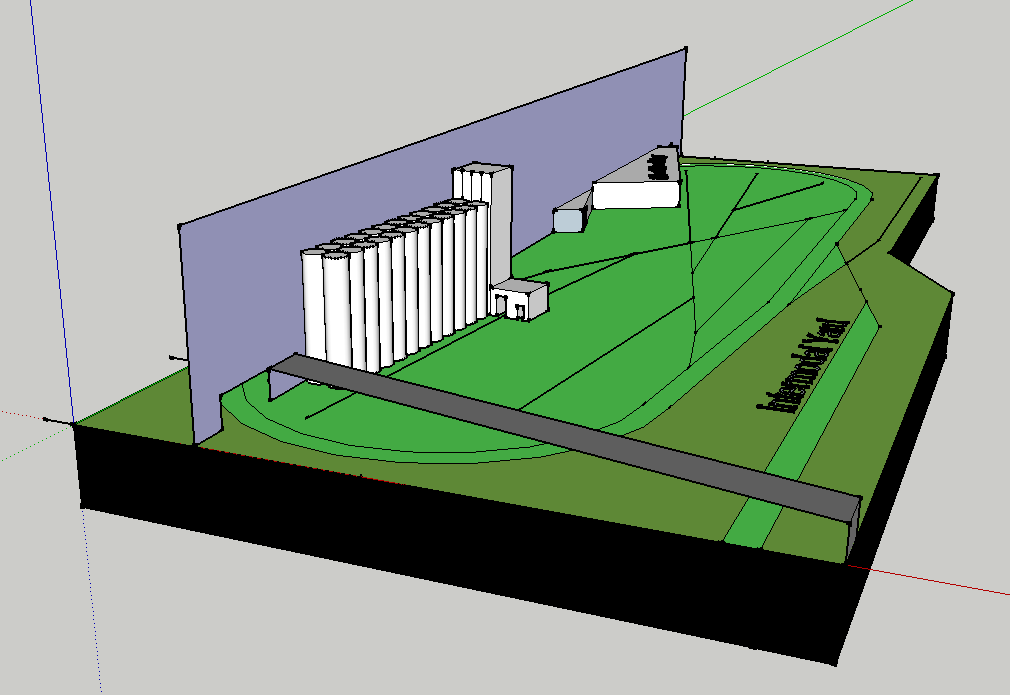 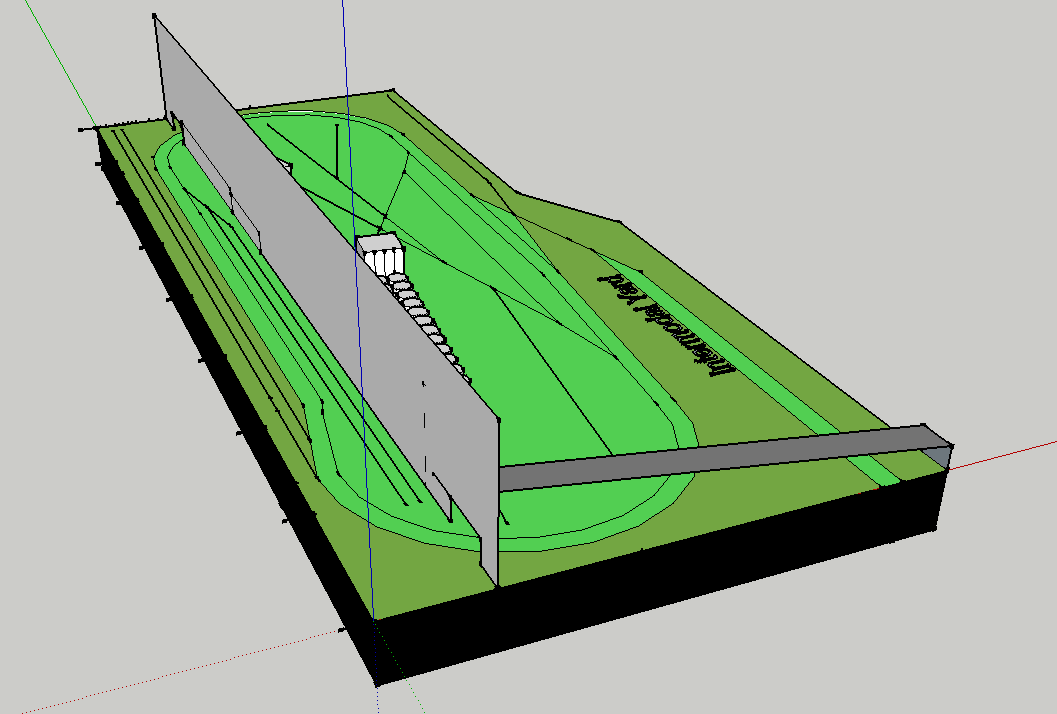