First, I apologize for all of the unfinished weathering projects I have been sharing lately.  I have a lot of projects in motion, and just need to put the final touches on many of them and put them back into service.  However, I guess it is also beneficial to show some of these weathering victims as they evolve so that I can illustrate the methods I am using for each.  I spent the last few evenings working on a pair of Trainworx 86' boxcars in a CSX blue scheme and NS (SOU reporting marks) scheme.

The CSX version got the "works".  I started with a white fade, then a raw sienna fade, then yellowish/white chalks, sealed, then yellowish/rust chalks, then oil for the roof and streaks.  That seems like a lot of steps, but once the airbrush is out, it goes quick.  The two layers of chalk followed by a seal coat were quick as well.  The oil is still a bit wet in this shot, so it appears shiny.  I will add some safety stripes, and maybe some more detail and this will be ready for a pair of trucks. 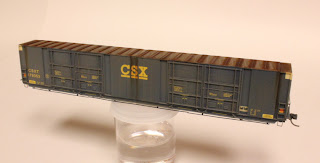 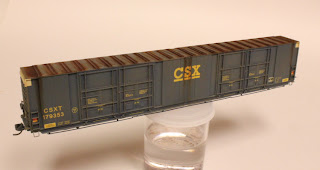 The NS received a white fade, then a raw sienna fade, then graffiti and safety stripes.  The first photo is the side yet to receive safety striping.  I also masked off a small rectangle to replicate a repair that had been painted with primer, which is much brighter than the original faded paint.  You can see it under the left graffiti tag.  I don't know what I plan to do with the roof yet, however, this car is a bit cleaner than the rest and will only get a light rust treatment if any. 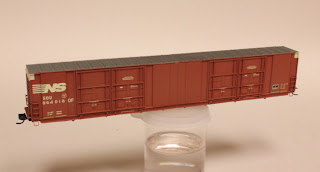 Here are the original cars before any weathering.  I really enjoy comparing a before and after, especially the darker cars like the CSX version. 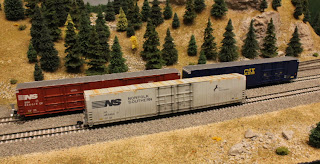 Posted by NscaleAddict at 10:08 PM