I recently tried using a cosmetic sponge for a BLMA flatcar weathering project, and have to say I really like it.  This isn't a new product to the model railroading space, as I know it has been used before, and even appeared in at least one Model Railroad magazine article that I know of.  I used it mainly on the deck of the RTTX flatcar to remove the brush strokes that appeared after applying layers of oil paint.  I have also tried a sponge on a hopper car, where a dabbing motion was used to apply surface rust.  I find that if paint dries on the end of the sponge, I can cut it off with a scissors, exposing a new fresh edge to work from, extending the life of a single sponge.

I am fortunate to have a wife that uses these and will simply buy some extras for me.  I wouldn't want anyone to get the wrong idea seeing me walking through the make-up selection at the local Super Target or Walmart.  Ironic how these sponges are either used to cover up the "ugly", or making an aged piece of rollingstock look "ugly".

Here is a used sponge with lots of burnt sienna and umber oils on it (try rubbing that on your face).  And a brand new package of sponges, ready for "uglification". 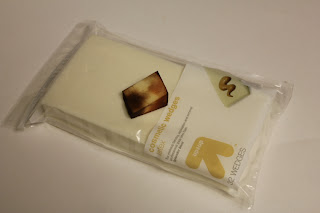 Posted by NscaleAddict at 11:07 PM