I've been focusing much of my N scale time on 3D printing projects, and the new layout was getting neglected.  Recently, I was able to spend some time on the two 8' bench work sections, and they are getting close to allowing me to start laying out some track designs and maybe some building mock ups.

Each section will be 8' in length, and about 20" in width.  I say "about" since the front edge of the layout will have about a 2" variation from end to middle, which can be seen on my track plan that I posted a few months ago.  In the photo below, some of the plywood overhang will get trimmed to the final dimension with a jigsaw.  The remaining overhang will create a recessed area below track level and on the fascia, which will accommodate my planned manual switch levers.  As of now, I plan to use slide switches mounted directly below each track turnout, with a length of piano wire extending vertically through the plywood base, and some type of horizontal connecting rod that will extend forward through the front edge/fascia, with a handle at the very end for manual control.  The slide switch is needed to route power to the frogs.  I used Caboose Industry ground throws on my very first N scale layout, and while they are fun to throw, they are over-sized. I wanted to keep the Council Bluffs Sub truer to scale, so decided against CI.

The backdrop pieces are cut and ready to install, however, I might leave them off until I get further in construction with the layout.  Being able to work from the front or the back of each table section is appealing.  I have caster wheels for each leg, and will be installing those soon too.

Unfortunately, I don't have a nice studio with sky blue walls like Model Railroader does to stage their project photos, so instead I get the wall of my garage.  At least I had some natural light when I shot these.

I hope to post a revised track plan soon as well, as I have a few minor edits to make.  I'm getting excited to begin laying out the design on my tables. 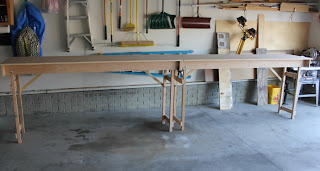 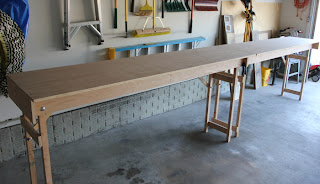 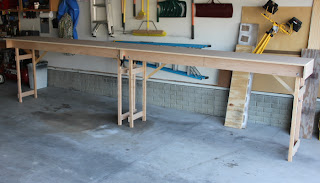 Posted by NscaleAddict at 7:10 AM