I have been thinking about a new layout a lot lately, and while I don't have the exact details solidified, there are a few things I know for certain.  One of those certainties is that I am going to have a grain elevator as a major focal point on the new layout.  I've been around grain elevators my entire life, and while Walthers does have a decent model, it falls short of what I consider to be a suitable structure for my layout.  Much like my Orin Line years ago where I ditched the Walthers flood loader for a length of PVC pipe, I am doing the same thing again for the grain complex.  Many grain elevators today are a combination of older concrete structures with more recent steel bins added for more capacity.  Just watch corn and soybean harvest here in he midwest and you will see why that extra capacity is needed.  Many facilities also have areas where they pile corn on a giant slab and cover it with plastic until they can get trains to haul it out during the winter months.

My design will be a combination of an older concrete structure, newer steel bins, and the typical tower dryer like the one you see in the photo below to the right of the concrete structure.  Of course to complete the grain complex I will need a scale, grain sample probe, unloading pit for both trucks and rail, and various trusses and structure components to tie all of the pieces together. 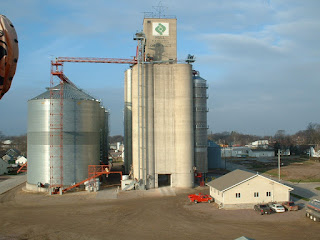 Here is the elevator I haul to often in Council Bluffs.  It's not a great facility in that it gets backed up quickly due to a single and slow truck pit (grey building to the right of the tower dryer).  But, it does offer unique modeling opportunities.  My grain complex will have a few design components from this site. 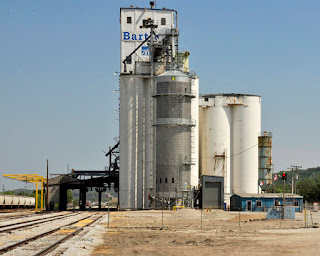 One advantage of being close to Council Bluffs is that there are multiple grain facilities to haul to.  Southern Iowa Renewable Energy (SIRE) is a fairly new ethanol production facility that has multiple truck pits and a lot of capacity to get trucks through quickly.  This is important during harvest when long lines can kill productivity.  The photo below shows a newer modern facility owned by Bartlett in a different part of the Midwest.  It is a good example of how steel bins are getting integrated into these commercial sized grain handling facilities, and not just individual farms.  Note the rail load out and the 3 truck pits for unloading.

Ok, on to my N scale model.  First I decided to start with 1.5" PVC and cut several sections of pipe 8" long.  These bins will be about 100' in N scale.  In order to create a nice seamless joint between each bin, I decided to run them through my table saw to make two flat sides. 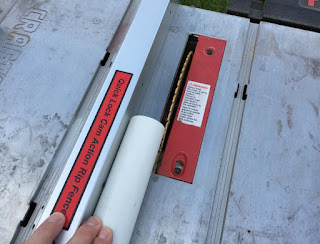 Here you can see the PVC bins with flat sides, ready to be glued together in a line. 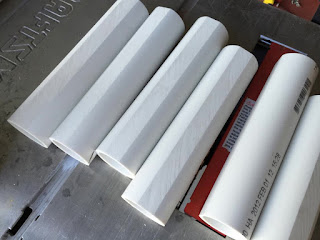 I used PVC cement to glue the pieces together, making sure I was working on a flat level surface so that the line of bins were perfectly straight. 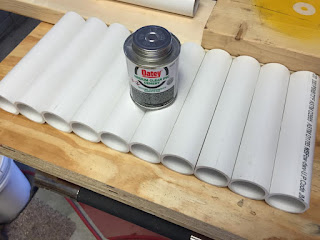 Even though I tried to mate each bin to the next without a gap, I still had some spaces between the bins.  I found an easy solution with a strip of .010 x .060" styrene.  I simply cut them to the same 8" length of the bins and secured with CA, which bonds to both styrene and PVC very well. Here is a close up of the bins glued together at their flat surfaces, and a strip of styrene to close the gap.  I am not finished with this step, but it makes a very clean transition between the curves of each bin. 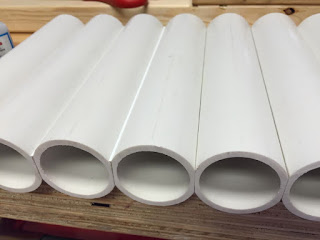 Here is a photo of a line of bins next to a loco and semi truck to give a sense of overall size. 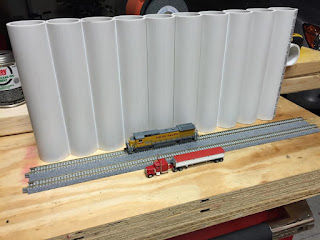 In addition to the concrete bins, I also bought a length of 6" PVC pipe for my steel bins.  The actual diameter is 6.625" which is about 90 feet in N scale.  With a sloped roof to match the 100' height of the concrete bins, these will hold about 500,000 bushels each.  These look fairly simple now, but I have big plans for these monsters.  My plan is to wrap each with corrugated styrene sheet, add vertical stiffiners, wind rings, and other details.  I also plan to design a roof that I can have 3d printed, although if that doesn't work or the cost isn't reasonable I may have to build it from scratch.  Like I said before, the Walthers grain elevator will pale in comparison to what I have in store for this grain complex. 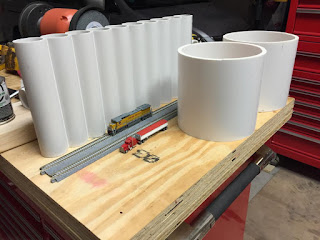 I'll throw this in for free.  Looking back over my collection of locomotives, which has been large at times, I have only owned 1 Atlas locomotive.  It was a BN SD60M, and about 15 years ago.  It ran lousy and I sold it not long after I bought it.  Everything else has been modern 6 axle diesels by Kato.  Short story short, I bought this guy the other day for $50 and it runs very well, and am a bit excited to have something a bit different for a change.  I still like modern, but I like when the UP still had red stripes on the sill, and patch units were still common.  I think maybe I'll have to lock my era in the early 2000's?  I now understand all of those modelers that have an interest in a specific era.

That's all for now.  I guess this shelf layout idea that is finally coming to fruition is starting to pay dividends in more ways than I previously thought. 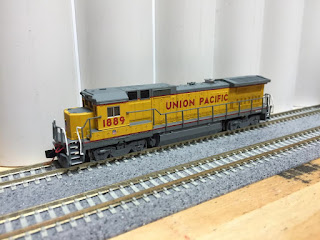 Posted by NscaleAddict at 10:05 PM

Email ThisBlogThis!Share to TwitterShare to FacebookShare to Pinterest
Labels: UP Council Bluffs Subdivision